Far, far away through space, on the other side of the Milky Way, a small blue planet revolves around a bright orange star. It is a warmish planet, with vast oceans and tropical islands, deserts and rainforests, and not much in the way of ice or snow. There are people on this planet – an advanced culture, in fact — who despite having made compelling advances in science and technology, are nonetheless oblivious to the physics of space travel (never mind the existence of the Earth), and who therefore look up into the vast reaches of the night sky not to see the marvels of the Milky Way, but to see a breathtaking river of stars, which they call the River Thames. And thus, being at the end of this river, that is what they call their world: Thame's End.
In the east of this world is a  largish continent ruled by the slowly crumbling Empire of Decidia. To the south are the Free Kingdoms, an archipelago of tiny nation-states and fiefdoms, ruled by free-thinking emigrants who left the Empire to stake their own claims. To the north you have the enigmatic Arcans, a reserved and mysterious people who live in a flying island miles above the ocean.
And in the middle of it all, is the island of Cog -- a crossroads trade-hub island-city governed by several factions and guilds, most of which are shady or criminal. The Cog is the place where riches are won or lost, dreams are made or broken. The richest and most degenerate place on the planet. And it made its riches by catching the stars.... 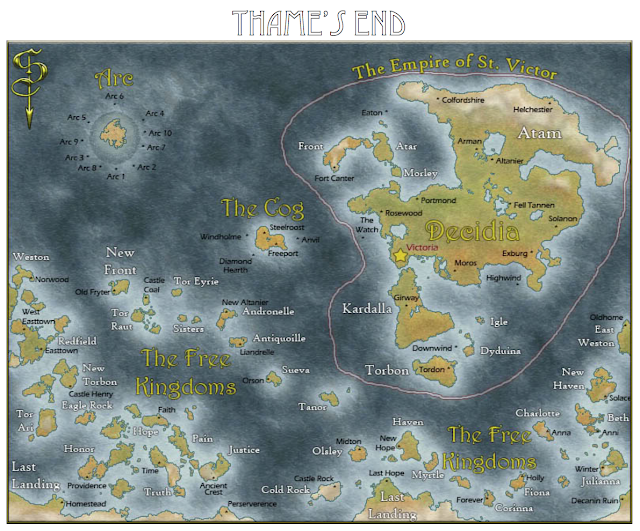 Eighty years ago, the planet began to be slowly bombarded by a never-ending meteor shower. Over and over the meteors fell, seemingly without end. Except these weren't regular meteors. They fell slowly — slowly drifting balls of flame wafting through the sky. They would plummet through the atmosphere, and then suddenly stop, hanging in the sky like blue and green stars, before finally wafting down towards the oceans and lands of Thame's End.
It was soon discovered that locked within the meteors was a new mineral which was very flammable. When this mineral was ignited, an extremely buoyant gas was released, a gas that was actually a brand new element, lighter than any other element known to man. Much, much lighter than hydrogen, in fact. The mineral they dubbed "Stradium", and the new gaseous element "Aeflor". The Aeflor caused the meteors to stop plummeting groundward when they ignited upon contact with the atmosphere. Instead, the meteors would fall for a bit, float for a bit, fall, and then float, as pockets of chemical compounds burned up and gave the space-rocks buoyancy.
Of course it was soon realized how valuable this chemical was. It was the perfect fuel, easily flammable and light enough to lift even the heaviest of vessels. Buoyant enough to lift a train! Or even a city, if you had enough of it! Thus began the biggest technological revolution in the history of mankind, which would soon lead to a bedazzling array of steam-powered marvels.
Governments around the world started sending out aerial mining teams dubbed "Starcatchers" to seize the meteors and bring them safely down to land (or into the ocean, whichever was easier). Many an aerial war was waged over these rocks, as Starcatchers from different allegiances came into conflict with one another. Eventually (and inevitably), groups of Starcatchers broke away from their respective lieges, bringing the star wars to the streets and the criminal underground. In the Cog, a Starcatchers Guild sprung up, a cooperative for free-contract privateers to take the stars to the masses. And thus, the fight for the stars rages even more fiercely to this very day.
PCs in this campaign world take on the role of a group of Starcatchers in the Cog — free contract privateers of the air, sea, and city — working for, with, and against various Factions in an effort to strike it rich or die trying. Accounting for the dangerous nature of their job, the latter result is more probable. Good luck....
~*~ ~*~ ~*~ ~*~ ~*~ ~*~ ~*~ ~*~
My campaign was originally written for use with FATE. Actually, a hack of Spirit of the Century (that’s how long ago I wrote this). I’ve run a couple of campaigns and some one shots in this world. It’s always a lot of fun. :)
I suppose you could use this setting with any mechanics you like, but I do highly recommend FATE for this kind of pulpy, high adventure playstyle. It really is the best game I’ve found for telling these kinds of stories. FATE is always my go-to for pulp adventure.
I have more where this came from, including crunchy mechanics and setting neutral fluff. Next time around: history!
Campaign Setting FATE Starcatchers Steampunk 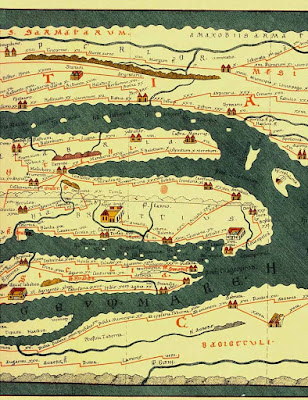